Takengon spread between the curves the hills and mountains. Not yet felt the sun warm the body while still showing at 06.00 hours GMT, still around cool air throughout the body, white clouds that blanketed the mountains just now beginning to move away as the coming of the sun, that's early in the morning in the Central Highlands.


"Tos Kope Kupi Nia (Nia Can you make coffee)," Safe unjar Sulas, a man who is a coffee farmer. His hair graying, dark-colored sarong never cracked from his waist, his skin began to wrinkle along his face.  Almost every morning Safe Sulas can not be separated from the coffee with a bandage tobacco from palm leaves, but lately it has been his habit to leave because of illness that began mengerogoti his old body. 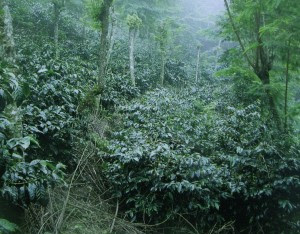 "Gere I osah doctor ne drink Kupi (no longer given the doctor a cup of coffee)," said his wife. Assurance that he boxed with plastic crackle always been a mainstay every time the treatment.
In the past, Safe Sulas is always busy with coffee plantations in Bur Elephant (a mountain), 1 km from his home. Every morning with a nice suit and a half shirt, on his shoulders hung gloves, pants fabric width culminate with an additional black boat shoes he walked to the garden.
He is not alone, usually the wife also joined mendapinginya, activities that he lakoni during berpulu ten years has proven to support his wife and five daughters until now.
Gayo highlands of Aceh province is located in the middle, there are many people who pocket on the agricultural sector, most of the farmers have their own land for cultivation. Coffee, tomatoes, potatoes, pineapple, al vokat is Part of commodities offered. For no less coffee plantations spread over 86,000 ha in Central Aceh, Gayo Lues and Bener Meriah. 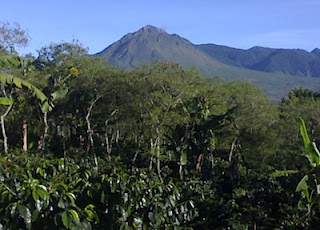 There are several excellent coffee varieties that have export value, such as varieties of East Timor, P88 and Borbor. To get a quality coffee, certainly a lot of things that must be considered as high land from the sea surface. Varieties of East Timor live better at altitude 1,250 m, P88 varieties at an altitude of 1.400m while borbor varieties at an altitude of 1520 m.
Production levels that can be produced per hectare coffee farm for 680 pounds for every year or for an area 45 000 ha of land can produce 31,000 tons per year.
It seems the woman who was familiarly called by this Tini meninggalakan ith the footsteps of his father as a coffee farmer, accompanied by her husband Tini now also has a plot in the village coffee gardens Atu Lintang. 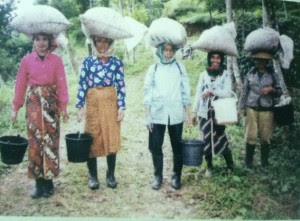 No doubt like a patani in Indonesia in general, Kartini also have experienced hard times, a pregnant woman was admitted earlier this month pendapatanpada experiencing shortages due to the coffee fruit that is not good.
To be able to go into the garden, Tini have to get up early in the morning, knowing only the distance he must travel to reach the garden takes about one hour.
Last three months of coffee growers are surprised by the decline in coffee quality caused by the dry season, of course, this condition can affect the price level that are sold by farmers. Usually the price is pegged toke coffee (the term for coffee buyers) can reach Rp13.000 per kg while the normal price, but now only Rp 10,000 per Kg.
Tini is quite adept at memorizing berbuahnya coffee season, "wan Biasae seton ulen onom fields ulen siwah Kupi Muah Gere, early nye ni ulen sepoloh sawahulen due belas Kupi baro Muah.

No fewer than 10 cans for 1 ha of coffee plantations can be harvested whenever he produces, "Biasae to feel so fresh ngotep sepoloh tem (Usually when once harvested to produce ten cans)," he said. However, this condition is certainly not enough to support his family and the unborn child was his bladder.
To meet the needs of families Tini management company is also working on coffee beans, it just sort of coffee, but for a woman to sit all day by relying on the agility of the hands is also considered as dire as the coffee harvest.
The desire to get a more decent life was ever in mind terbesit Tini, a woman who had since childhood growing up in neighborhood coffee farmer was admitted one day he can become a toke of coffee, it's just because of lack of capital could not help achieve that dream.
"Niet mujadi toke Kupi into the fig, but even capital ilen Gere (Intention to become a toke my coffee there, but not enough capital)," he complained.
Similar conditions are also felt by Wartini (29) a widow who had become head of the family for her two children, everyday he spent in the workplace with the youngest who was four years old. Rp4000 up to 10,000 can he bring home, of course, to make ends meet day-to-day he must be clever divide needs.
Also Wartini also worked as a washerwoman and the iron, just clear this condition is still more complicated for adequate day-to-day.
The data obtained from the ICO (International Coffee Organization) obtained tingakt coffee consumption in 2005 reached 118 million sacks while in 2007 reached 125 million bags, this condition means an increase of seven million sacks within the last two years.
Coffee arabica coffee exports mainly to the international market is known by several names such as Gayo Sumatra, Mandheling Coffee, Sumatra Mandheling, Mandheling Gayo, Super Gayo, Gayo Mountain Coffee and Retro Mandheling.
From some other coffee producing countries, like Brazil and Africa, Indonesia is much ketingalan in increasing the quantity of exports.
Gayo coffee trade routes to international markets is not directly in exports from Aceh to foreign countries, but it must be through out the province such as Medan.
Gayo coffee prices in international markets no less competitive, it is quite expensive compared to other export commodities, but the lives of local people who pocket their lives on coffee plantations do not undo changes from year to year.
To increase sales of coffee exporters have to work hard to improve the quality and sfesifikasi products according to standards established by the intended coffee companies, such as sales to America's biggest coffee company Starbucks Coffee Co. is set CAFE standards (Company and Farmers Equity Practies).